Ouch. The Marlin’s hopes heading into the nation’s capital collapsed quicker than The Wall in Game of Thrones as all of our progress sweeping the Padres was more or less reversed with the Nats sweeping US. At least the Rockies have been losing a bit. And there’s still our .500 record, for now.

Here are some rather painful stats from the series. Giancarlo Stanton went 1-for-10, though he did get number 51 on his sole hit. Some consolation I guess. Vance Worley was unable to tap into his recent magic on the Nationals getting chased out early, in fact only Adam Conley made it past the fifth inning putting down a strong 6-inning effort Thursday giving up 2 runs on 7 hits. Though I must confess, these runs came on a pair of long balls from Washington second basemen Wilmer Difo and Stephen Strasburg himself. But let us continue, Realmuto went 3-for-12, Derek Dietrich 0-for-9, Miguel Rojas 1-for-9, Marcell Ozuna 3-for-11, Christian Yelich 4-for-11 and Dee Gordon 6-for-13. Besides the Flash, the team played woefully inconsistent with players (Yelich and Ozuna) being a factor in only 1 game of the series if even that. We were outscored 23-5. 23-5. Oh it gets better, our starters gave up a combined 11 runs while the bullpen surrendered 12. Remember when I said that our division rivals would love to knock us down a peg? They definitely did.

Blame goes all around this series and while this is definitely a setback the team returns home to face the Philadelphia Phillies in an attempt to regain ground. A sweep of Philadelphia I’d say is almost completely required due to the butt kicking in D.C. Luckily we’re only 5 ½ behind Colorado so our hopes aren’t exactly dashed with 30 games to go. However, looking ahead we still have 3 more games against the Nationals along with at least one additional series with the Phils with contests against the Brewers, Braves and Mets. Did I mention just before our final series at home we go up against the Diamondbacks and the Rockies? There is little room for error and it gets tighter and tighter with each passing game, more so with each loss.

But do not lose hope dear fans, as previously mentioned there is still plenty of baseball left to be played. With a good run and a little bit of luck from other teams we may very well pull this off yet. And if not, who cares! If we can get a winning record, that in itself is an amazing accomplishment. Remember back in early June where we stood. And if none of that helps you, imagine how good it will feel when it becomes official that Joffrey Loria (See what I did there?) is no longer the owner of the Miami Marlins.

I’m actually pretty curious on who we’ll be calling up come September. Given all the potential roster moves I wonder how our bench, lineup and bullpen will look. The more arms the better, it’s pretty clear we cannot count on our rotation to give many quality starts, we rank near the bottom anyways. Depth, consistency and of course health are critical down the stretch. The Marlins will have to go minimum 20-10 to make it beyond the regular season, but we can do it. It got a lot tougher but go team! Until next time, stay frosty.

Tebow Watch: Timmy has been struggling, batting only .235 the last 10 games (Last game August 29) with one RBI and zero homers. Good news is he’s only struck out 7 times during that span. He is batting .225 with 5 dingers and 28 RBIs so far in his tenure with the St. Lucie Mets.

Prospect Watch: Over in New Orleans, centerfielder Brandon Barnes has been swinging pretty well batting .289 in the last 10 games with a homer and 3 RBIs. He’s second in the team in average (.279), homers (11), RBIs (49) and even steals (15). He also leads the team in runs with 55. All-rounder if you ask me. Sadly, I do not see a call up for him in September.

Starting with July 5, @Marlins star and @MLB HR leader @Giancarlo818 has 30 HRs in his past 48 games: https://t.co/GBFvZu6BjU pic.twitter.com/GkyiSIUEZa 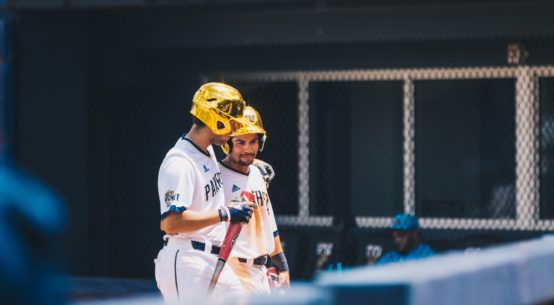