Skip to content
You are here
Home > NCAA > Conference USA > Another Shula Bowl, another blowout win for FAU over FIU 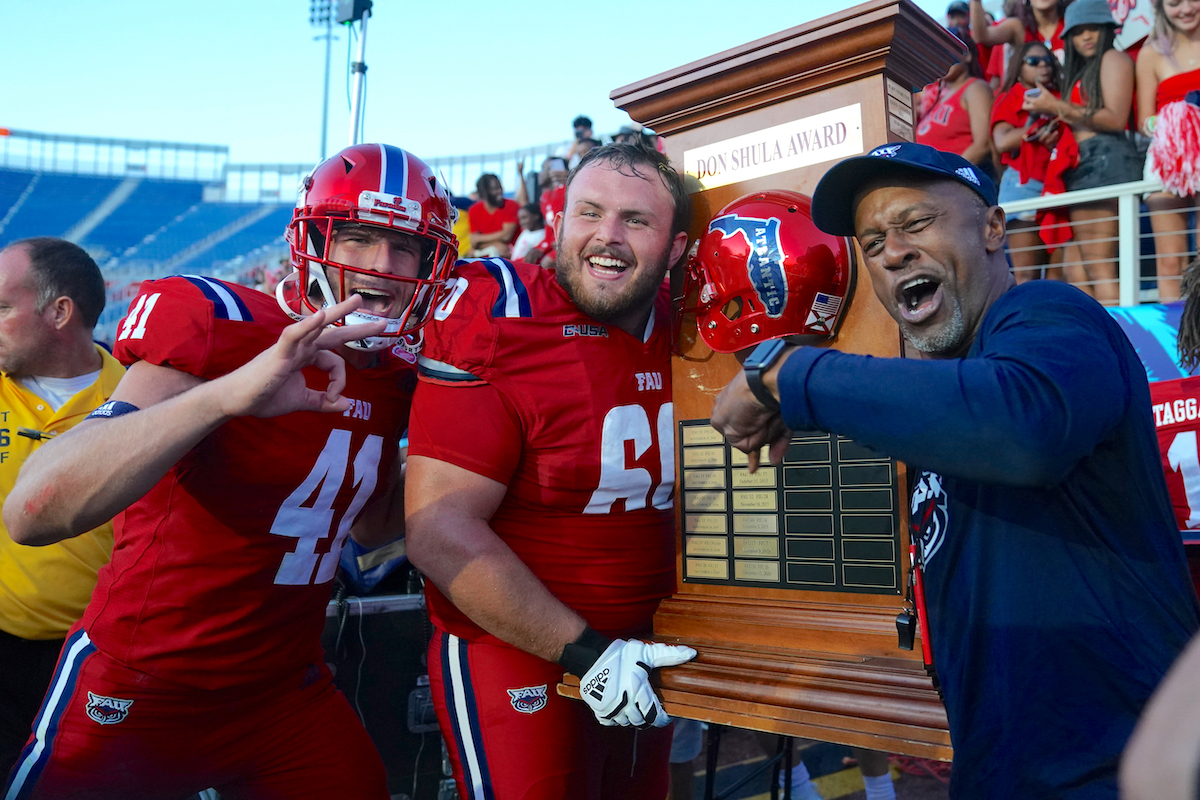 The term “rebounds” is usually used in basketball. However, when it came to FAU’s loss over Air Force last week where nothing worked for them, they needed to rebound.

They did just that.

“What a win. That was a great win for our football team. Great way to bounce back after the way we played last week. I’m very proud of our guys for doing that. We challenged our offense about coming out and playing fast. That’s something we hadn’t done all year. Executing our plays and just carrying on from that point on, and just showed they’re capable of doing it, and more importantly, if we focus and practice that way, we get good results off of it. I thought N’Kosi (Perry) played outstanding. I’m glad he played outstanding because the way that he worked this week was the way he was supposed to work. We got back from Air Force at 8 in the morning, at noon he was trying to get better and learn what he did wrong. It’s no surprise that he played the way he did.”

Besides the 58 points that FAU scored, they had a balanced offense on the ground and through the air that was missing last week. In total, the offense had 704 total yards, and it all started with quarterback N’Kosi Perry’s stellar night.

“We fired on all cylinders. First off, I think we had a great week of practice from Tuesday to Friday. Everyone was locked in from the beginning to the end and yesterday’s practice was the best practice all week,” Perry said. “When we did that, I knew we were ready to go like we had a tough mindset and we came in prepared. We were able to run the ball today which was huge for us and anytime we can run the ball, I think we’ll be successful.”

Throwing for under 80 yards the week prior, this time he put up 329 passing yards, three touchdowns, and added a rushing score. He was named the Shula Bowl MVP by the end of the night.

The name N’Kosi Perry will forever be on the Shula Bowl trophy.

He was on point and made big throws and plays that’s unlike any quarterback the school has ever had. Going into the game, the defense was seen to be vulnerable, and Perry took advantage of that.

Wide receiver Je’Quan Burton was the top receiver Saturday with 121 yards on seven catches to go along with a touchdown. That play showed how exciting both players can be with Perry evading pressure on the left side, rolling right, and throwing a deep pass to Burton, who never gave up on the play.

His other touchdown connection came to running back Johnny Ford who had two catches for 91 yards and a touchdown. The touchdown catch was an 89-yard play where Ford was wide open up the middle and no one could catch him.

Spotted in the crowd during the #ShulaBowl… the students erased the 679 and updated it accordingly as the Owls burrowed their way to a 58-21 FAU victory. pic.twitter.com/ljtdoBTdDM

The Owls established the run against the Panthers, with Johnny Ford leading the way with 102 rushing yards to go along with the passing numbers. According to Ford, he might’ve not seen that play coming, which could’ve been why he bobbled the catch at first.

“Yeah, I didn’t know it was coming to me,” Ford said. “I wasn’t expecting it because the last few games, they were bracketing me and stuff like that so that’s why I came out like that, which you can’t hide that. But I knew once I got it in my hand, what I was going to do with it.”

Even with Ford’s spectacular dual-threat performance, he said that he thinks he didn’t do enough, but he has one endgame: to win. He said it doesn’t matter if he finishes the game with five yards or to be used as a decoy, the goal is to always win.

Perry was relieved the play happened the way it did but was scared to see that when he threw the ball to Ford, he wasn’t looking at him.

Since the beginning of the season, the offense has been looking for a fast start, but it’s always been drops, penalties, and self-inflicting wounds that’s been holding them back. The first drive for FAU lived up to their hopes as Perry started that momentum by connecting to Brandon Robinson on a variation of a flea-flicker for 45 yards. That drive ended with Perry’s rushing touchdown, his second in the past two games.

After that drive, FAU did stall, even losing 14-13 after a failed two-point conversion attempt, but then put up a 27-point second quarter. It was all Owls after that.

While it was all sunshine and rainbows for the Owls offense, there was concern in the third quarter when Perry left the game with a hand injury. He left the field to the locker room to get it examined but was back on the sidelines later. It turned out he suffered a cut to his throwing arm where Perry said he might’ve happened on an offensive lineman’s helmet. Perry said he had to get stitches, but he’s fine.

Taggart said that he could’ve gone back into the game if they really needed him, but didn’t find it was necessary. By that time, the score was FAU leading 37-21.

Backup quarterback Nick Tronti came into the game after and the offense didn’t stop scoring. He threw for 68 yards and ran for 32 with a touchdown.

On the defensive side of the ball, it was a tale of two halves. The first half says the Owls give up 21 points to the Panthers, with a lot of drives including chunk plays from quarterback Max Bortenschlager to his pass-catchers. But, in the second half? They were held to a goose egg.

A statistic that stands out is that the opposing team only rushed for 69 yards, and holding one of the conference’s best backs in D’vonte Price to 34 yards on 16 carries.

“Well, they did the one thing we set out to do from the beginning and that was stopping the run, so that part was mission accomplished. We wanted to keep [D’vonte] Price under 100 he had like 34. So, that was pretty good and on 16 carries? I’ll take that,” Taggart said. “But the thing I always told our defense about each week, we can’t give up big plays for touchdowns, and when they do catch it, we got to get them down. So I was disappointed that we gave up those big plays for touchdowns because that’s not how we play and our guys understand that.”

Two defensive players that stood out were defensive back Zyon Gilbert and linebacker Akileis Leroy.

Gilbert collected an interception against FIU in an impressive ballhawk-like play where he out-matched the receiver.  Gilbert talks about the play:

“When the ball came my way my eyes got wide, I had to lock in on it,” Gilbert said. “But when the ball was in the air, I just knew I was like saying to myself that this is mine, I just got to get this one, especially after giving up a touchdown. But as a cornerback or a safety quarterback, you gotta have a short memory.”

Leroy led the team in tackles with eight and talked about how special it was to be in this environment after missing the Shula Bowl last season. He was noticeably very happy and emotional after the game.

“Wow. I was telling a couple of guys after the game just being able to participate was huge, and we had players meeting Thursday and I’m just letting the boys know, I just felt like I waited a year for this game,” Leroy said. “The intensity that I came into this game, the passion when I stepped on the field as soon as I had a chance, I had to spread the energy where I could. I just made sure everybody was on the same page. I felt like that was one of my roles this week.”

This was a much-needed win, to say the least for FAU after dropping a deflating loss to Air Force a week ago, but this puts them back on track. Not only did they win the Shula Bowl, but this was huge since it was the start of conference play.

One aspect of football that leads to success is momentum, and FAU is riding high heading into next week as they’ll travel to face the UAB Blazers. 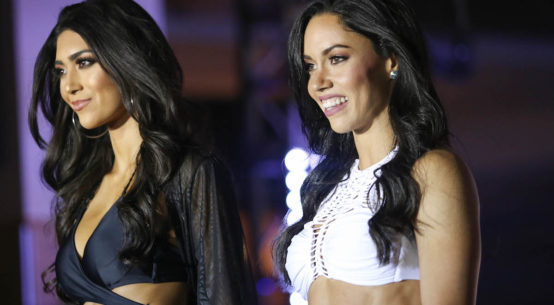 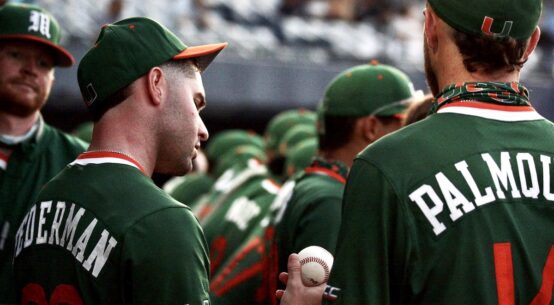