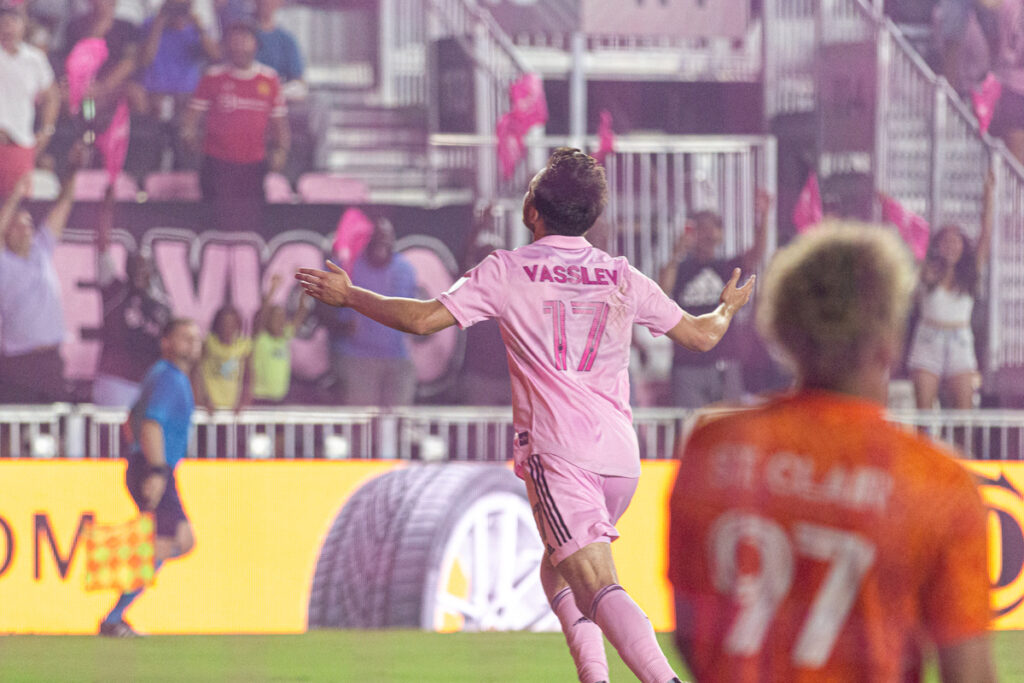 Fort Lauderdale, FL – The maiden match between the Herons and the Loons at DRV Pink stadium was an instant classic. Indiana Vassilev made a dramatic entrance at the 83’ minute, and rescued Inter Miami CF with a pair of goals at the 86’ and 89’ minutes respectively, dooming Minnesota United.

Phil Neville tweaked the starting XI against Minnesota. Robert Taylor started on the wing, with Victor Ulloa getting the nod in the midfield for the suspended Jean Mota. Ryan Sailor returned to the starting lineup at center back, and team captain Gregore was back in the saddle as the pivot.

The first half had Miami dominating possession and the tempo of the game. The Herons moved the ball around the pitch deftly, and Bryce Duke was electric. Duke had some highlight-reel plays, among them a rabona into the Minnesota box at the 27’ minute. Neither squad was able to get on the scoreboard despite creating clear scoring chances. The half ended 0-0.

Minnesota United started the second half with a much better flow to their game. At the 55’ minute the Loons nearly got on the board, but Drake Callender saved the Herons. Emanuel Reynoso served a ball into the Miami box for Franco Fragapane at the 64’ minute. Fragapane, with a spectacular side scissor kick, pushed the ball back into the goal area for Luis Amarilla to slide it past Callender for the goal. Minnesota was up 0-1.

Luis Amarilla taps it home to give @MNUFC the lead! pic.twitter.com/TJRAFEGxm9

Coach Neville put all his chips on the table, making three offensive-minded substitutions in the second half. Emerson Rodriguez came on for Victor Ulloa at 61’, Gonzalo Higuain for Robert Taylor at 66’, and Indiana Vassilev for Ariel Lassiter at 83’.

The substitutions provided a spark for Miami with Indiana Vassilev scoring a historic brace for the Herons. Vassilev became the first player in MLS history to come on after the 80th minute and score the game-tying goal and the game-winning goal. The gritty IMCF pulled out a dramatic win, igniting a party at the stadium.

Gets better with every angle. 🤌 pic.twitter.com/YoCWiE02kV

A dapper Phil Neville addressed the media after the game. I was intrigued by a statement he made in regards to the substitutions for Miami in the match. Nevile said,

One of the many criticisms thrown Neville’s way is that he usually coaches in a conservative manner. The team tends to play the counterattack, and if there’s a lead he often changes tactics to a more defensive formation.

“This is the new Inter Miami."

Head Coach Phil Neville talks about tonight’s win and the importance of the fight and players coming off the bench. pic.twitter.com/g4HTUdgQkb

Throughout the current turnaround, the coach and his team have been evolving. The team is holding greater possession on the pitch and has shown a willingness to propose, and not just wait to respond. Likewise, coach Phil has made some changes to his style of coaching. The match against Minnesota United was a good example of the new style. The substitutions he made were all offensive, looking to keep three points at home. Rodriguez was a spark in place of Ulloa, then Higuain for a tired Taylor. Finally, Indiana for Lassiter, the key move. Yes, the Herons were losing, but I believe early-season Phil would not have been as aggressive. He would not have played Emerson, he would not have left Duke on the pitch all game. After the tie, early-season Phil might have parked the bus and settled for the tie. Not evolving Phil, he trusted his young players and pushed the pedal to the metal looking for the win. I like this risky business the Herons are into now.

Inter Miami CF is in the middle of an epic rebound to their season. Nearly halfway into the campaign, the Herons have made a significant surge. They’re not in a playoff spot yet, but their current form provides hope that they can be at the end of the season. This is a testament to the gritty and resilient team identity that coach Phil Neville has stressed from the beginning. Kudos to him and his players.

Bryce Duke, the “little gem” according to coach Neville, just keeps flashing a wonderful skill set. I have said that he is the conductor for the midfield, but Saturday night he showed he has the total package. Duke defended his heart out, and still managed to get a wonderful assist. Higuain as the attacking midfield and Duke as the box-to-box midfield worked very well. This is another option in Neville’s tactical arsenal. The Duke of Miami is becoming more and more consistent, more and more important to Inter Miami’s success.

Emerson Rodriguez is silky smooth with the ball at his feet. Now he must be efficient when passing to his teammates. His ceiling is very high also, like Duke. Inter Miami has two “little gems”, with both Emerson and Bryce. They are on course to be shining stars, let’s enjoy their rise.