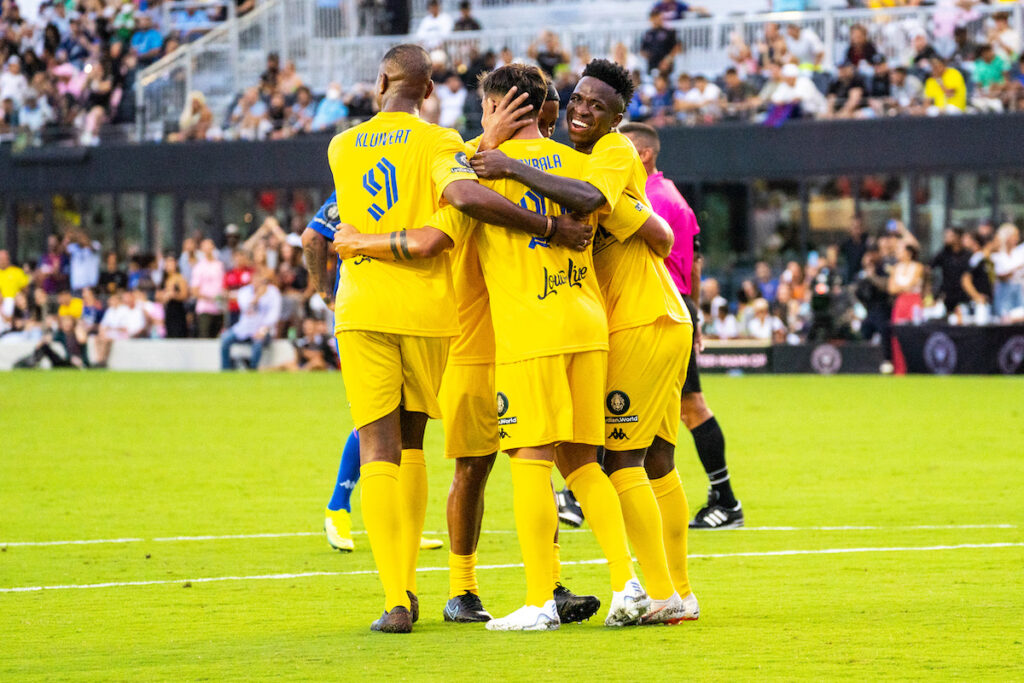 Fort Lauderdale, FL – Saturday evening’s event at DRV Pink Stadium, “The Beautiful Game by R10 and RC3,” was a gathering of legendary friends to play a game of fútbol and reminisce. The crowd was vibrant, with fans of all ages cherishing the fact that so much fútbol history and star power were on the pitch.

Before the match began, I thought I was watching an Over 45 Sunday League game warm-up. The players lightly jogged or touched the ball in small groups, having a good time chatting with each other. Once the ball rolled, the magic was on display. A little slower, less intense but magical nonetheless. The night was something out of “Fantasy Island”; a dream come true, with a nightmare included. To have players like Ronaldinho, Roberto Carlos, Carlos Valderrama, Radamel Falcao, Rene Higuita, Vinicius Jr., Arturo Vidal, along with many others in South Florida, is fantastic. The eyes of the world were on DRV Pink Stadium. The game was entertaining, with team (RC3) beating team (R10) 12-10.

“The Beautiful Game” was a prelude to hosting World Cup matches in 2026 in regards to organizing a fun event for fans. The “dream” was having a great turn out to the game, and the fans visibly enjoyed themselves. The “nightmare” was the number of pitch invaders at the match. I have never seen so many people invade the pitch in a game in my life. It was not a good look for South Florida or for security at the stadium. Fortunately, nothing major occurred and both players and fans were unharmed. I look forward to many more events of this type in the future, and surely with the lessons learned they will be even more beautiful.