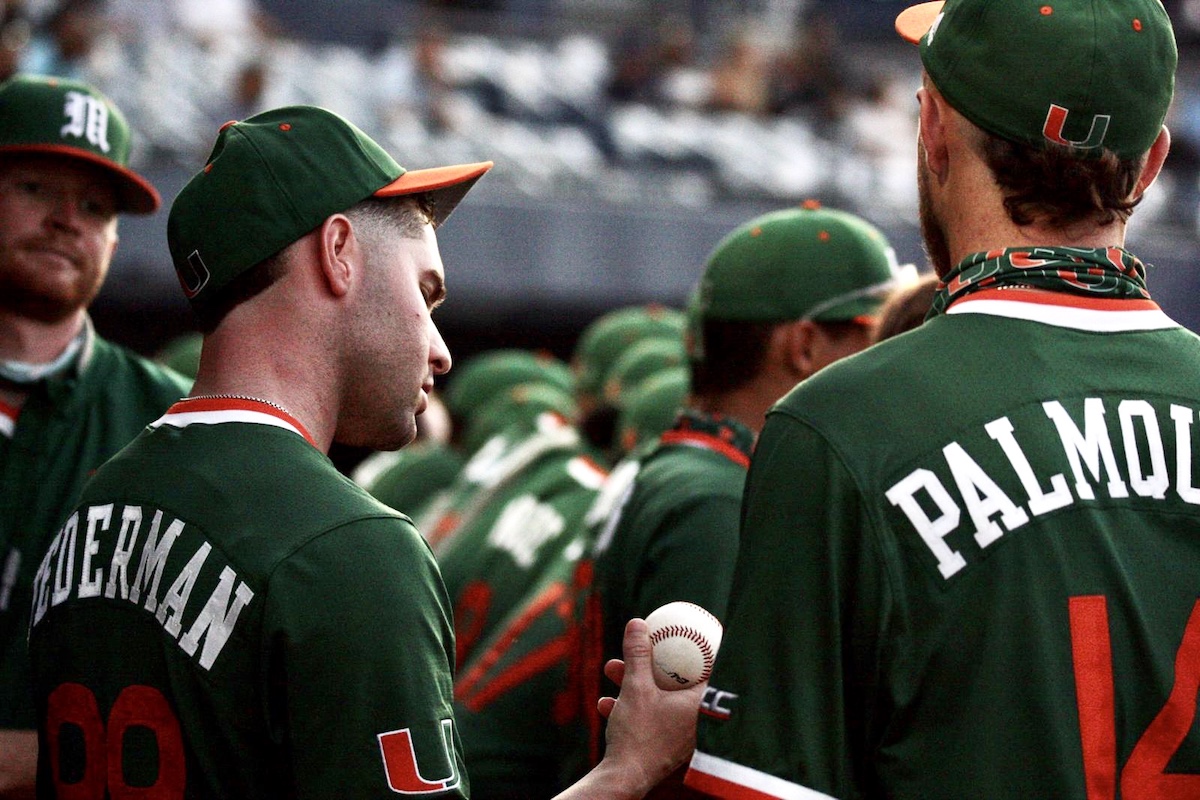 Miami, Florida – The battle quickly turned into a rout. Miami annihilated FIU 21-1 to take the first round of the Battle for the 305 in dominating fashion. As previously mentioned in the preview it was going to come down to the pitching and defense, Florida International had neither. Four of the regular starters were not in the lineup for the Panthers. Juan Teixeira, Derek Cartaya, Alec Sanchez, and Luis Chavez’s absence left a glaring hole in their offensive output. Combined the quartet hit for .308 on the season.

Judging by the outcome and Jake Garland’s performance, however, it would not have mattered. Garland pitched a quality start tossing six scoreless innings scattering five hits. It was a bullpen game for FIU with Jermaine Vanheyningen taking the mound for the first two frames, giving up an earned run on two hits. It all fell apart after that as UM produced up and down the lineup.

Running Away With It

Jordan Lala started the Battle for the 305 with a bang, launching a solo shot off the leftfield foul pole. UM threatened to charge ahead even further in the second inning when they loaded the bases for Lala. Vanheyningen fanned the Canes’ leadoff man to get out of a jam. This proved to be the pitching staff’s high point.

FIU tried to respond that same frame after Adrian Figueroa poked a seeing-eye single up the middle. Garland threw a wild pitch advancing the runner into scoring position and Ben Rozenblum grounded out to bring Fig to within 90 feet of scoring. He was left stranded as Francis Villaman grounded out.

T7 | Jared Thomas is pinch hitting for Del with the bases loaded and one out. 18-0 Canes pic.twitter.com/4FOktHP9aZ

Things continued to go Miami’s way. Stringing together several big hits, they exploded for five runs in the third.

Yohandy Morales doubled to rightfield plating Anthony Vilar. Justin Farmer tried to make the diving catch but came up short, deflecting the ball to keep it from rolling back to the wall. Adrian Del Castillo hit his own two-bagger scoring Yoyo. This was followed up with a single up the middle by Christian Del Castillo who drove his younger brother home. Alex Toral and Dominic Pitelli joined in on the hit parade, lining their own two base-hit RBIs. There were a total of four doubles in the inning.

In the fourth Yoyo hit an RBI triple, advancing to home on the wild pitch making it 8-0 Canes. UM continued up put up crooked numbers, scoring six in the fifth and four in the sixth.

FIU ultimately sent out a bunch of pitchers, eight to be exact, finding absolutely no answers in the face of Miami’s relentless hitting.

Florida International did get one back after the seventh-inning stretch. Villaman sac flied to center field plating David Judge. The Hurricanes took the early lead and never looked back leaving the Panthers in the dust. Hot on the heels of their dominating win, the Canes improve to 4-0 in midweek games (outscoring opponents 61-14) rising to an overall record of 13-8. FIU falls to 9-13 including an 0-2 record in midweek games.

Looking back, the last time these teams squared off was in 2019. Another life. It was a period of packed stadiums. In the case of FIU, the only occasion in the entire season you’d see such attendance was when UM came to play. No masks, no social distancing just another baseball game. I remember the blaring music, the cheers, and the atmosphere setting the tone in what became a 10-8 Miami victory. The game lasted over four hours. It was insane! The media and radio crews were all crammed into one area beneath a tent. There’s no press box. Despite the tight quarters, it was still an enjoyable experience although it was a fierce free-for-all for the power outlets. Hey, people gotta charge their phones.

Tonight’s event was another video game score albeit a very lopsided one. Still, it brought a degree of normalcy between crosstown rivals even if it acutely showed the Hurricanes beating up on “Little Brother”. This makes it three victories in a row with Round 2 on April 7th. Florida International will look to get some revenge then.

Miami Freshman Chad Born recorded his first-ever RBI in the ninth inning, bouncing one off the pitcher’s mound right up the middle to score Jared Thomas. (Highschool teammate?)

Miami scored 21 runs on 19 hits committing no errors (What was the streak of errors?)

After going cold against Virginia, Adrian Del Castillo recovered hitting 2-for-4 (both of them doubles) with 3 runs and 4 RBIs. Well done!

FIU should feel embarrassed by this performance. This is not how the jersey should be represented. 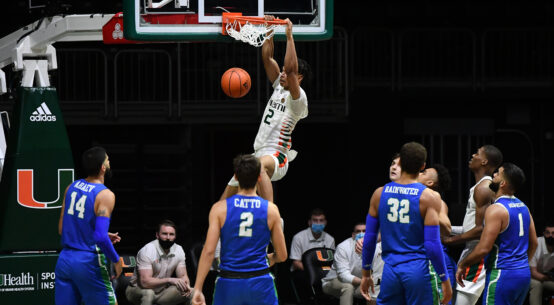