When I was 11 years old, I played organized baseball for the first time in my life. It was the spring of 1999 and I played at Flagami Park in Miami, Florida. I know now the park is located on 72nd Ave. and 24th St., but I didn’t then. Then, it was just the park by the railroad tracks, the one just after the Burger King. It was the beautiful sandlot with shitty grass, with the cart serving Cuban sandwiches, and the place where, for the first time legitimately, I would finally be able to do my favorite thing. Seemingly, just the start of another season for the little league Orioles. In actuality, though, it was so much more than that.

I think I was like three years old when I picked up my first glove. In Cuba, only two kinds exist, baseball and boxing. But really, neither of them do. Or rather, everything is so scarce, that even the country’s most popular sports have limited equipment to go around to the general public. In proper perspective, just understand the inability to simply step out to the store and buy something. There is no such thing. Therefore, even the most dated, fake-leather, broken-down, piece-of-shit mitt will have to be re-strung at home with whatever the hell you can get your hands on and handed down through generations. Such was the case for the aforementioned glove picked up by little three-year old Enrique. My glove was my uncle’s glove and his father’s before him.

So I grew up, I grew up the same way many around me and all over the island did. Playing in the streets with neighborhood friends. If you’ve heard any Cuban innovation stories, I participated in them all. Cut down a sturdy branch and make a bat out of it because you won’t have one otherwise? Did it. Cut the tip of a broomstick to use as the ball and the rest as a bat? Played that. Four corners, base/handball, and all of it barefoot? Yeah, those were the good old days. Those are only the baseball related ones, but you get my point. My favorite team was the Industriales. Havana’s team and a name synonymous with top-notch Cuban baseball, the Industriales were also passed down in my family. I saw Orlando “El Duque” Hernandez pitch before he came to the states and became MLB playoff royalty for the New York Yankees. I saw that shit right on my 19″ black-and-white, get-up-to-turn-the-dial television. Baseball was life in that island, and trust me, there wasn’t much else to that life.

June 11th, 1998 a plane landed in Miami International Airport with my mother, my little sister, and myself on it. At the gate, waiting for us, the man responsible for it all. The man that won a Cuban national lottery to allow him the opportunity to change his family’s lives and possibly migrate to the United States of America. The same man who left his family behind for a bit, difficult as it was, to be able to gather the funds necessary to bring them over. The very same who worked two full-time jobs as a just-off-the-plane alien for three months to complete that task. He is the greatest man I will have ever met, and he is my father.

This is not a story about the immigrant struggle. I have no interest to make this a tell-all regarding my family’s “How To Make It In America” story. However, perspective is necessary. When you grow up without much, in a country where hopes and dreams don’t exist because neither does that elusive future, unassuming is just a way of life. Appreciative and humble are ingrained values. After all, we came from nothing. My family rented a two-bedroom duplex in Westchester, Miami, Florida. For the first couple of months, we had a single, queen-sized mattress we laid on the living room floor; it was a gift from a family member. The four of us as together then as we are now, going to sleep together, waking up together, and taking care of each other. That’s all we had, that’s all that mattered.

I remember the fall of 98 vividly. I had a next-door neighbor whose kid would spend some days over. Richard was my age, and he became my friend. Richard played baseball. Like, he played real baseball on an actual field with bases, catchers with full gear, kids with bags full of equipment. What a concept. It was amazing. I wanted that. I wanted to do what I had basically spent most of my life watching and learning how to do. My dad, he knew it. When fall was coming to a close and spring registration came out, he signed me up.

First-time players required trying out. It was standard procedure as the league’s coaches checked-out the talent and took their notes to the draft before the official season. I had to attend this try-out. I knew I wanted to play baseball, so I had that, but I didn’t have much else. Grasp of the English language, friends, confidence. I had none of that. Oh, and also, I had no equipment. The days leading up to the try-out were brutal. I figured I would just borrow some equipment the way we always did in Cuba, maybe Richard would help. I do remember my father keeping me calm, though, He’s always had a way of centering me.

I came home from school the day of the try-out. An absolute mess, the bus dropped me off at home and my mother opened the door. She knew what was going on and how important/nerve-wrecking this day was for me. I dumped all my school things and headed straight for my room to change. I will never, for as long as I have breath in my lungs, forget the very next moment that occurred.

In my room, a room I shared with my sister, on my bed were an assortment of things. I honestly have no idea how or when, the man worked relentlessly. But on top of that bed, was a brand-new glove (infielder sized just the way I loved), the shiniest aluminum bat I had ever seen, a pair of batting gloves, and a red-and-blue, Cleveland Indians logo baseball bag to hold it all in just like in the movie Major Leagues -turns out the Indians bag was all the store had. Above it all was a paper stuck to the wall with three colorful English words on it in my father’s best calligraphy. “FOR THE CHAMPION”.

The Lemon Drop is a weekly segment entertaining whatever the hell comes to the mind of Enrique Sierra, Jr. (Hipster Rick). Simply a sports lover who will never be able to pay off a massive debt to his one-of-a-kind father. Please click back next week for more and feel free to comment or engage us through Twitter, Facebook, and Instagram. 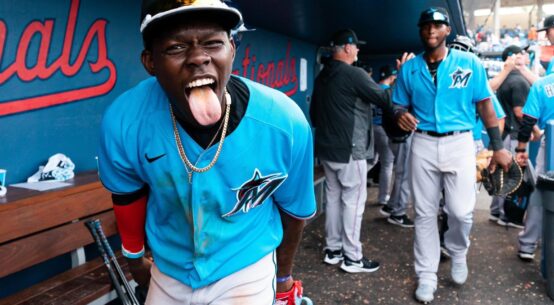