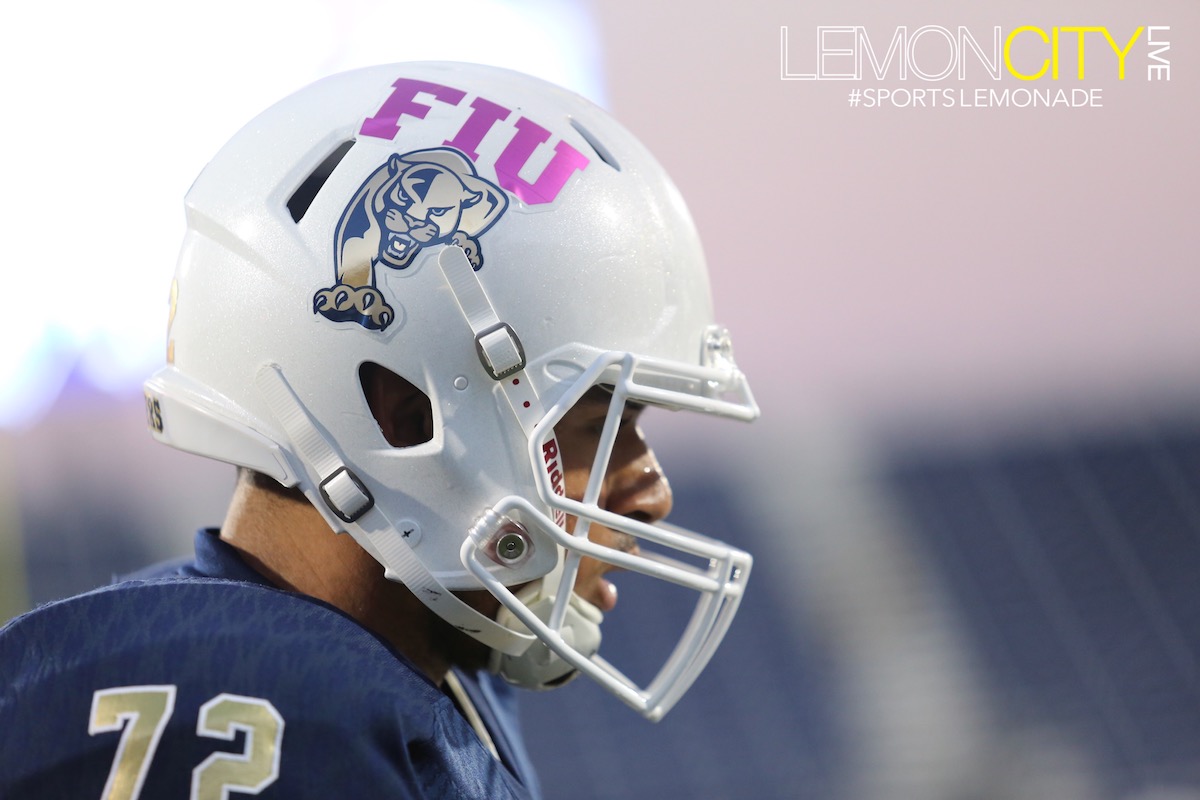 Miami, FL – The FIU Panthers (4-2, 2-0 C-USA) made the most out of an ideal opponent, taking care of business by clipping the Rice Owls (1-6, 0-3 C-USA) 36-17  Saturday night at The Cage. The Panthers also wore pink FIU helmet decals in honor of breast cancer awareness. Tonight also marked the return of the GOAT of FIU and current Seattle Seahawk Alex McGough. Welcome home, Alex.

Rice quickly got on the board, scoring in the opening drive on a 4th and 1 from the Panther’s 7-yard line. And why not? Their season is basically over and they’re facing an East Division-leading FIU squad. With such a quality opponent, an aggressive game plan was their best shot at victory.

Unfortunately for them, the Panthers were prowling up and down the field all night.

After a slow start on offense (3-and-out and a FG on first two drives), the blue and gold raced ahead on the heels of a 51-yard jet sweep rushing TD by Maurice Alexander, his first since 2016. Considering it was his first carry of three on the night, the young man surely made the utmost out of it. Florida International scored once again as they made a meal out of Rice’s secondary with a 33-yard pass from Captain James Morgan to Austin Maloney to put the Panthers up 16-7. The Owls managed a 47-yard field goal just before the half to keep it close, 16-10.

The rest of the game was all FIU.

Following a 38-yard chip shot by Jose Borregales, Morgan widened the lead with a 29-yard bomb to sophomore wideout  Shemar Thornton to make it 26-10.

If there was ever a moment that Rice’s efforts were futile, it came with 9:39 left in the game when a misguided throw by freshman Wiley Green (He was not the starter) was intercepted by sophomore cornerback Rishard Dames, by then the Panthers were cruising, 33-17.

In the postgame conference, coach Butch Davis dispelled any notion of the team ever underestimating Rice. Davis conveyed that going into the game, teams like Rice are the types to always work their butts off despite their record.

“Wounded animals are dangerous people,” Davis said, reiterating that his team prepares every week as if they’re facing the New England Patriots.

FIU’s offense finished with 446 total yards including 229 yards in the air. The team was 9-for-16 on third-down conversions and a perfect 1 for 1 on fourth-down conversions.

Austin Maloney finished the night with 4 catches on 8 targets for 73 yards and a touchdown.

D’Vonte Price and Napoleon Maxwell both led the team with 12 carries each, the former gaining 79 yards and the latter 39.

Despite the largely one-sided affair, the series between these two teams is not only relatively new but was split 1-1 heading into tonight’s game. FIU won last year’s defensive battle 13-7 at Rice before losing their first meeting back in 2014, 31-17.

Jose Borregales was awarded Player of the Week in Special Teams by C-USA after his fantastic performance against Middle Tennessee, shattering the school record for the longest field goal, a 53-yarder. He finished the night 3-for-3 on field goals, his longest of the night being 47 yards.

FIU wrapped up their homestand winning all three games. Next up is a trip up north to face the Western Kentucky Hilltoppers next week. Rice moves on for another hard game, this time against North Texas.

The Panthers are one win away from becoming bowl eligible.