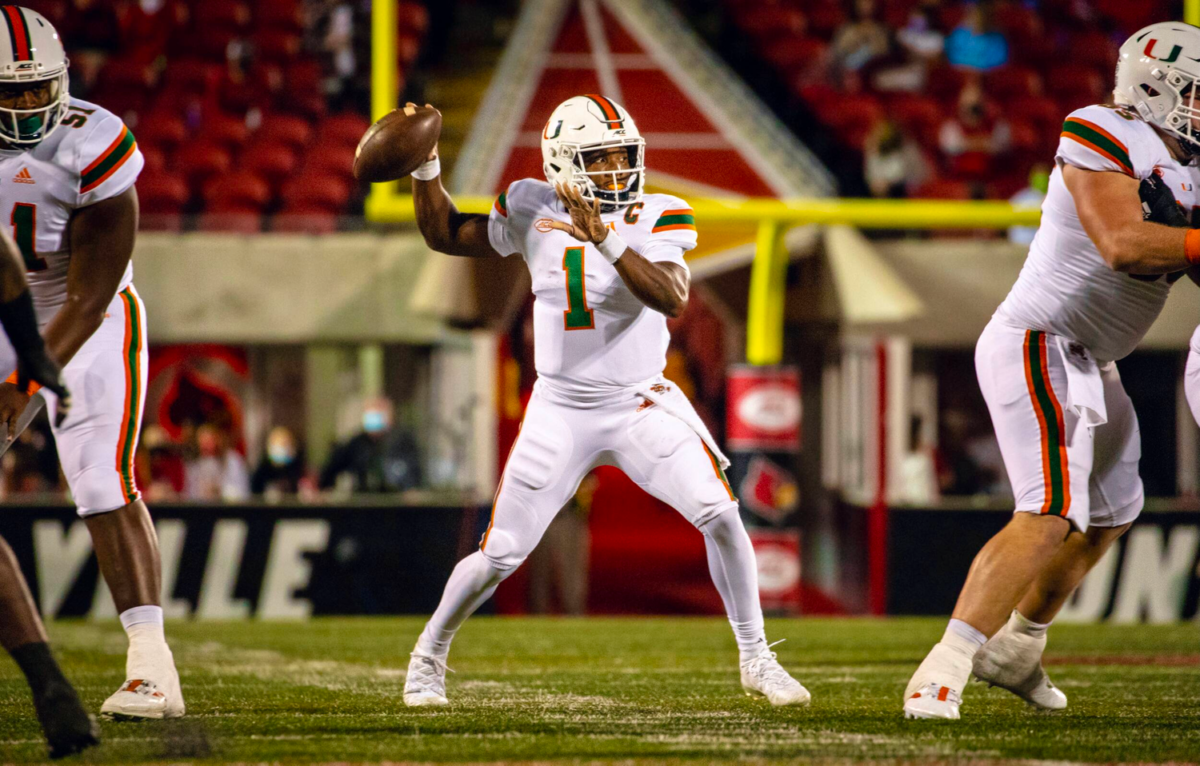 Miami, Florida – Ready for primetime the Miami Hurricanes defeated the Louisville Cardinals 47-34 Saturday night in their first road game of the season. The conference matchup saw the No. 17 and No. 18 ranked teams square off after winning their home opener. The Canes came into the game confident despite several experts giving the edge to the Cards. Never doubt Lee Corso folks. Miami took the lead after scoring on their second possession and never looked back. The offense came out in force as the defense limited the Cardinals to just two field goals in the first half, debuting the Turnover Chain.

Will Mallory had the honor of catching UM’s first touchdown of the night. Quarterback D’Eriq King hit him for the 17-yard strike giving the team a lead they would never relinquish. Brevin Jordan showed athleticism late in the first quarter when he hurdled over the defender, setting up freshman running back Jaylan Knighton’s first career touchdown.

Jordan eventually got his own TD late in the game, found wide-open in a 47-yard play taking advantage of lax coverage. Miami would lead by as many as 20 points. Jose Borregales showed off his golden leg with just under 6 minutes to go in the half, kicking a tremendous 57-yard field goal with room to spare for a new school record.

The defense finally saw the debut of the Turnover Chain when Malik Cunningham threw his first and only pick late in the second quarter. Cunningham was chased out of the pocket and fired right into the waiting arms of Al Blades Jr.

Louisville’s Javian Hawkins kept it close with a 19-yard touchdown run in the third quarter to make it 20-13 but UM immediately responded. On Miami’s very first play of the second half, Cam’Ron Harris broke out for a 75-yard touchdown. Speeding past four defenders and then a fifth, Harris poured it on making it to the endzone just as a sixth defender finally caught up to him. He finished the night with nine carries for 134 yards.

On their next drive, King found a wide-open Knighton, sneaking the pass and unleashing the rooster finding no opposition for the 75-yard score. By then Hurricanes were up 34-20.

Tutu Atwell kept the Cardinals competitive catching two touchdowns in the second half but it was not enough.

The win propelled Miami to No. 12 in the latest AP Top 25 Poll. Dominating the first half the Canes kept it up the rest of the game. The Turnover Chain made two more appearances as UM forced two fumbles recovering both. There were also three sacks, including one from Bradley Jennings Jr. making it a nice increase from last week. Overall, I am happy with the Hurricanes performance. I was a bit surprised at how heavily favored Louisville was but all that mattered at the end of the day was the final score. They’re off to an excellent 2-0 start with Florida State University next on the schedule.

After their success in The Ville, Miami should be the big favorite as they host the Seminoles. D’Eriq King had another great outing throwing for 325 yards including three touchdowns. The passing game took over the driver’s seat, contributing most of the 485 total yards by the offense. My only real complaint: the penalties. UM committed 11 of them and they will need to clean that up for the upcoming contest. FSU will be without their Head Coach Mike Norvell who tested positive for COVID-19 on Friday. Here’s wishing coach Norvell a speedy recovery.

Still all about The U 🙌