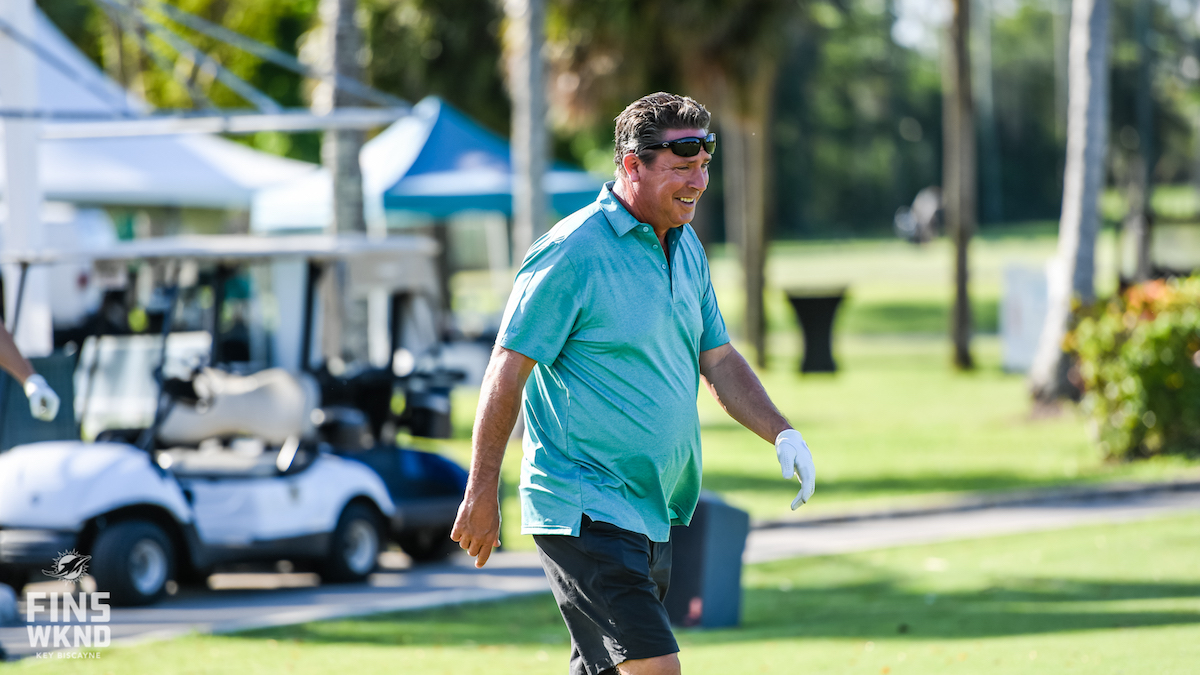 Miami, FL –  The Miami Dolphins Foundation hosted the 22nd annual Fins Weekend, complete with golfing, fishing and parties amid the largest gathering of players, coaches, alumni and cheerleaders to give back to education in South Florida.

The signature charity event welcomed several new additions this year, from enhanced fan experiences to added player access and involvement. Proceeds from the event weekend, through the education impact area of the Miami Dolphins Foundation, benefit City Year Miami, an education-focused nonprofit organization that partners with public schools to help keep students on track to graduate.

“There’s a lot said about a community and an organization that can come together for the benefit of our youth,” Fins Weekend Chair Jeff Peck said. “I’m amazed by the amount of character within the South Florida community that this event revealed. It shows that we make our greatest impact when we come together and work toward a common goal.”

The festivities began early Saturday morning with the Fins Weekend Fishing Tournament at Rickenbacker Marina. Boats took to the seas angling to capture the largest kingfish, dolphin, wahoo and tuna.

The Weigh-In presented by Hooters South Florida included members of the Dolphins rookie class on site to sign autographs, and provided fans double the opportunities to give back to the Miami Dolphins Foundation through a garage sale of team items, including player-issued apparel and unique Dolphins knickknacks.

About an hour after lines were in the water for the fishing tournament, a shotgun was fired, prompting the start of the Fins Weekend Golf Tournament presented by South Florida Ford. Threesomes golfed at Crandon Golf at Key Biscayne with a Dolphins current or former player or coach. Team Pepsi and team members Mark Stokes, Gene Christman, Carl Carris and Ki-Jana Carter took home the priceless first place prize – a flight on the team charter for a 2018 Dolphins away game.

After the golf tournament, participants reveled in the Fins Weekend Saturday Night Party at Miami Marine Stadium. Guests gathered to enjoy a live band, local fare, games, live auction and a fireworks show. The winners of the Fins Weekend Fishing Tournament were also announced, with Team Remix and members Michael John Greisman, Rick Pruim and Alberto Suarezreigning as the first place finishers. They join Team Pepsi Golf Tournament winners on the Dolphins charter to an away game.

“This event is larger than just a fun day of fishing and golfing. It’s more than just a party and meeting the team you cheer for all season. This is a cornerstone event where the Miami Dolphins strive to do our part to make educational advances in our South Florida community,” Miami Dolphins Foundation Executive Director Jennifer Jehn said. “The Miami Dolphins Foundation has a commitment to being off the field champions. Fins Weekend is a reflection of the Dolphins’ work in leveling the playing field, aspiring to have teamwork at work.”

Thanks to all who participated in our 22nd annual Fins Weekend!#TeamworkatWork pic.twitter.com/ftx94jGlxH

The funds from Fins Weekend benefit City Year Miami through a four-year, $1 million partnership. The Dolphins made a commitment to help young people who are working to transform education in Miami Gardens, sponsoring programs at Miami Carol City and Miami Norland Senior high schools.