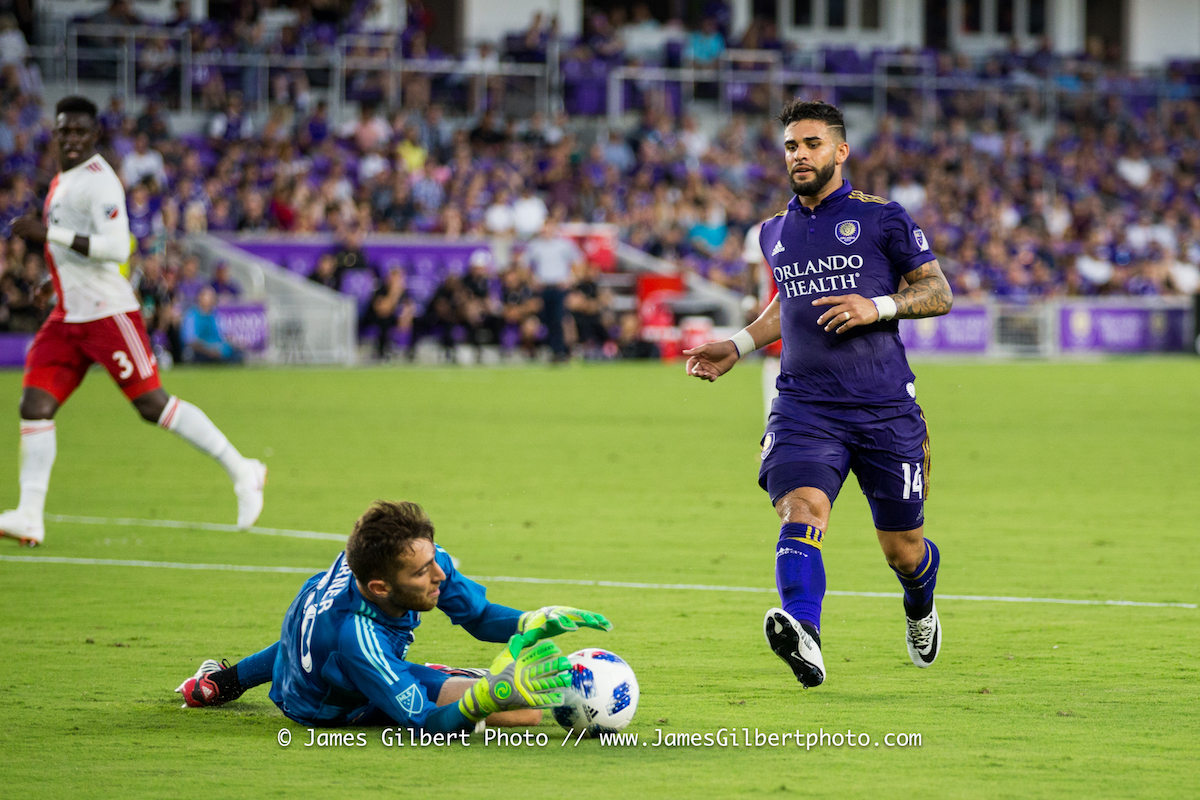 Orlando, FL – What did the five fingers say to the face? Well, according to Rick James, “SLAP!” The Lions were staring at a fifth straight loss directly in the face. Their last win came on July 14th, at home versus Toronto. They had since lost four-straight matches, all on the road, except for their July 26th loss at home to NYCFC. Have they lost that Fire and Desire? Orlando City SC vs New England Revolution was nothing short of a team relying on desperation to avoid getting slapped, Cold Blooded.

Prince Juan Agudelo and the Revolution got off to an early lead. Agudelo scored a header off a Brandon Bye throw in, catching City GK Earl Edwards Jr. off guard in the 7th minute. 1-0. Then, in the 18th minute, the Revolution brought down that purple reign, as Luis Caicedo clipped the ball away from Shane O’Neill, deep in Orlando territory, allowing Cristian Penilla to bend it around Edwards into the top right corner. 2-0. However, right before the half, The Beautiful Ones (City) got one back, as Yoshimar Yotún fed a running Tony Rocha, who centered it to Dom Dwyer for the finisher! 2-1. Let’s Go Crazy!

The second half was another Thriller. The Lions knotted up the match in the 71st minute when Yoshi, off a free-kick, puts the ball into the box, good for a Amro Tarek header! 2-2. Five minutes later, Agudelo fed Teal Bunbury, just outside Orlando’s box, where he dribbled in and nutmegged Edwards to regain the lead for New England. 3-2. They made the defense look Bad there. Nevertheless, this is a Dangerous game and you Don’t Stop ‘Til You Get Enough. In stoppage time, Yoshi, once again, off a free-kick, gets another assist! This time, he provided for Scott Sutter‘s game-tying header, his first goal of the season. 3-3. The game marked one year since Yoshi signed with City. Remember The Time? Sacha Kljestan gave the captain’s armband to Yoshi when he exited the match in the 44th minute. Yoshi then gave the armband to Dwyer when he was shown a straight-red for a scuffle after the goal. Wanna Be Starting’ Somethin’? Yoshi’s performance was the first three-assist match by a Lion in MLS since Kaka on Sept. 25, 2015 against the New York Red Bulls. Beat It!

The good news? We didn’t lose…
The bad news? We dropped 2️⃣ points, when we should have all 3️⃣

This is how it all went down. #NERevs pic.twitter.com/FebZibZHhF

Here’s the thing, City fans. The Lions are at a point where they’ve got to Give It Up or Turnit a Loose if they want to Make it Funky. They’re now only six points out of the final playoff spot, with 11 matches to go. Only Philadelphia and New England stand in their way. They play Philly at home on Saturday, September 1st, and away at New England on Saturday, October 13th. The Lions are just looking for The Payback. So, Orlando players, if you’re reading this, all we’re asking is to Get Up Offa That Thang, Get On the Good Foot, and Please Please Please make a late season push!